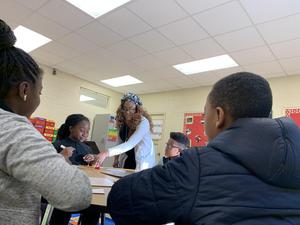 The Lee County native recently moved back to her hometown from the Spartanburg and Rock Hill areas where she taught for more than five years, initially working as a long-term certified substitute teacher at Lee Central Middle School (LCMS). Her experiences coupled with a degree from Winthrop University in Rock Hill, S.C. in middle level education (concentration in math and science) have adequately prepared her for her first year in the new position, she says.

In fact, seeing the students as they learn the basics of math will make a world of difference, according to Lyle.

Lyle has developed various games which challenge the students to higher levels of thinking and she’s done so with no holds barred.

“As a teacher, you concentrate on their needs but you also have to teach the standards,” says Lyle. “With this job, I’m concentrating on what the students need and able to deliver that to them, and I get to be more creative because every student needs something different.”

In her classroom, different is what they get. Lyle’s math multiplication game is a fast-paced, round-table challenge of peers, which keeps the students at attention. Of the game’s origins, Lyle says, “I created the math game with the cards because I saw there was a struggle with them and their multiplication.”

Lyle says it’s a universal problem that has existed since she was in school.

“Just that retrieval…I remember that was like one of the processes that we used when I was a kid and it worked,” she says. “So, (the game was created) just to help them get those multiplication facts down because I always tell them if you can’t multiply, you can’t do the other math in class.”

“I believe in a student-friendly environment where it’s student-centered – where they are engaged and they are learning,” says Lyle. “So, with (this) space, I feel like I get to be creative and reach them where they are and concentrate on their needs.”

Lyle has earned numerous awards for her teaching methods and continues to build upon her craft as she is currently in pursuit of a master’s in educational leadership from Gardner-Webb University in Boiling Springs, N.C.