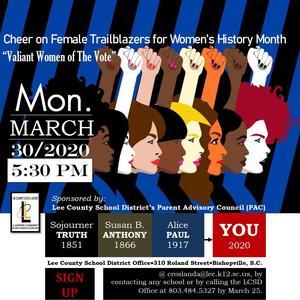 The Lee County School District (LCSD) Parent Advisory Council (PAC) will celebrate Women’s History Month at their regularly scheduled meeting Monday, March 30 at 5:30 p.m. There will be orations given by community members that either celebrates the life of a female trailblazer in history or one who is history in the making.

This year’s theme is “Valiant Women of the Vote” honoring "the brave women who fought to win suffrage rights for women, and for the women who continue to fight for the voting rights of others."

Students, parents, educators and community members are invited to speak at this event by signing up at the district office, any school within the district, by emailing croslanda@lee.k12.sc.us or by calling 803.484.5327. Space is limited and the deadline is March 25. There will be door prizes and other give-aways.

The event will be held at the District Office at 310 Roland Street in Bishopville.

About Women’s History Month (from www.womenshistorymonth.gov):